Some might argue that Italians are most responsible for inventing the coffee culture, and a lot of it centers around high-quality espresso–and has long before Nespresso pods hit stores.

But even that is changing. While typically Italians have enjoyed their espresso standing up, now many of the cafes, once renowned, are accused of being stuck in a ‘time capsule’. For some this is a good thing: prices are low, there’s a feeling of tradition and community, and there’s no denying that many of the cafes populating Italy are charming, in ways modern franchises are not.

But charming as they can be, there are signs they’re losing some traction as more modern methods and tastes are largely eschewed. By doing so, these cafes run the risk of divorcing Italians of their rich and innovative connection with espresso and coffee culture.

Espresso both as a beverage and espresso brewing methods, in general, are very much embedded in Italian culture. Well over two centuries before Nespresso would debut, one of the first known espresso machines was invented by Angelo Moriando and perfect several years later by Milanese Bezzera in 1901. The word espresso actually comes Italian and translates as ‘fast’.

After Bezzera debuted his popular machine, espresso itself grew in popularity, and the trend made its way to the United States in 1927. But since then, there’s been a push to continue to innovate not just brewing methods, but even what kind of espresso is served.

Nespresso and espresso may have similar names, but there are several differences. Taking a look at taste, method, price, and tradition vs innovation, we’ll investigate and sort out some common misunderstanding, as to the difference between Nespresso vs regular espresso. 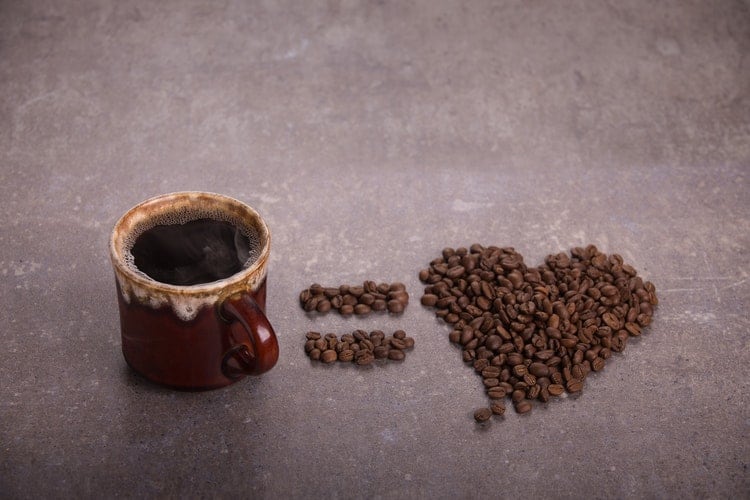 A Big, and Competitive Industry:

The coffee industry as a whole, espresso and Nespresso included, is a booming industry, as it has been historically and continues to be. And Americans especially love their caffeine boost: Americans drink an average of over 3 cups of coffee a day, and half of Americans drink espresso, cappuccinos, lattes, and iced coffee.

An average cup of espresso outcomes in at about $2.45, which may not seem like much, but adds up to about $50 a month, or a whopping $600 a year if you order a single espresso five days a week.

Maybe it’s in part due to the recession of 2008 that changed shopping habits, despite the economy relatively healthy now, but even some espresso lovers are more and more brewing at home rather than getting beverages out.

While up to 64 percent of Americans consume coffee and espresso every day, just under eighty percent reported brewing their beverage of choice at home. Likely, more and more Americans are opting to enjoy their espresso at home for a variety and even combination of reasons, including:

What is espresso? And what does an espresso machine do? 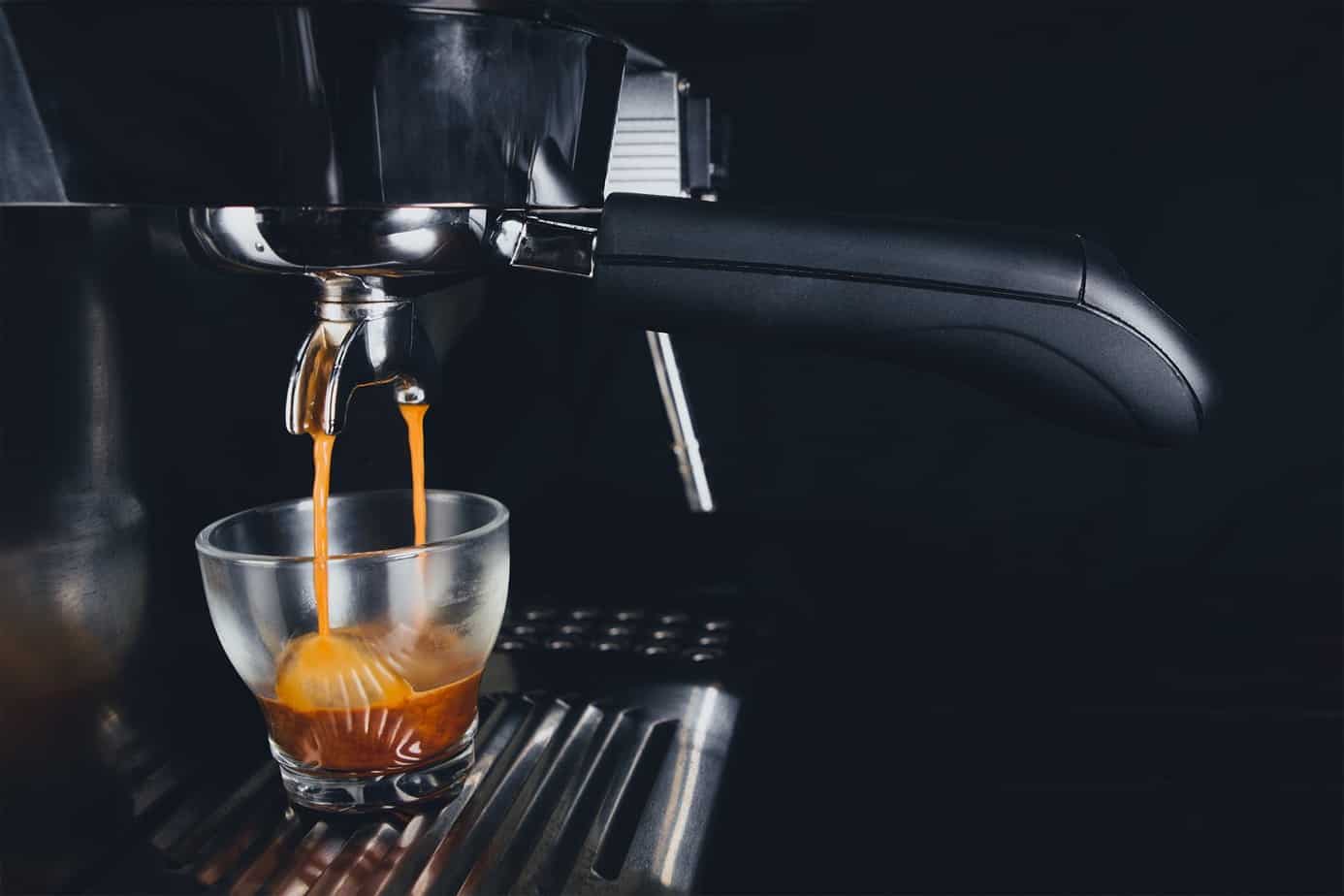 Espresso is actually not a specific type of roast, but a drink achieved through a specialized brewing method. High pressure in an espresso machine forces boiling water through finely-ground coffee for a powerful drink that takes an average of fifty coffee beans for a single shot.

And espresso brewing is not a simple feat: a single bad quality bean can corrupt the flavor. While espresso is a form of coffee, typically robusta or arabica beans are used. The combination of pressure and boiling, along with specifically selected beans, make espresso the signature and powerful flavor that it is. Espresso drinks tend to be more complex, have a deeper aroma, and pack more caffeine than a coffee drink.

Coffee must be very finely ground, unlike other drinks, to make a good espresso. The complexities of technique often lead people to purchase an espresso machine if they want to enjoy an espresso at home (though it is possible to make espresso without a professional coffee machine if you are cautious and have a little talent).

What is Nespresso? Is it espresso? And how is the brewing process different than normal espresso? 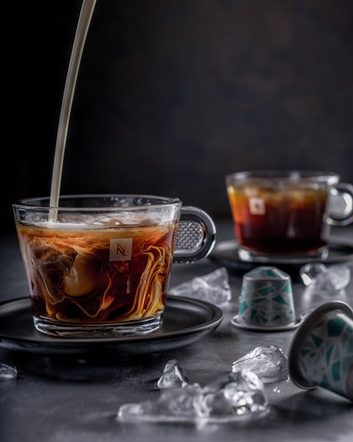 By name alone, you might assume that Nespresso is some variation of or form of espresso, but the reality is slightly more complicated.

Nespresso is considered premium coffee and may also refer to a series of breeding systems that are all capsule based. Capsules also contain a unique code, which is scanned by a laser in order to process how much water, what temperature, and how long each cup should be brewed. Because of this, no other capsules work in Nespresso machines.

The Nespresso company is based in Switzerland and is now partnered with Nestle. As of 2017, Nespresso had over seven hundred store locations to buy both their coffee and machines and reported an annual sales revenue of $3 billion by 2011.

Nespresso sells coffee capsules, but all of their machines are designed to create their version of espresso. Different lines were developed for different preferences. The newer Vertuoline, for instance, was specifically released in North America to appeal to the American preference for larger drink servings than is typical of traditional espresso.

The espresso Nespresso brews is a bit unique in a few ways. In order to explore, we’ll have to first look at the difference in the brewing process of typical espresso machines vs Nespresso. 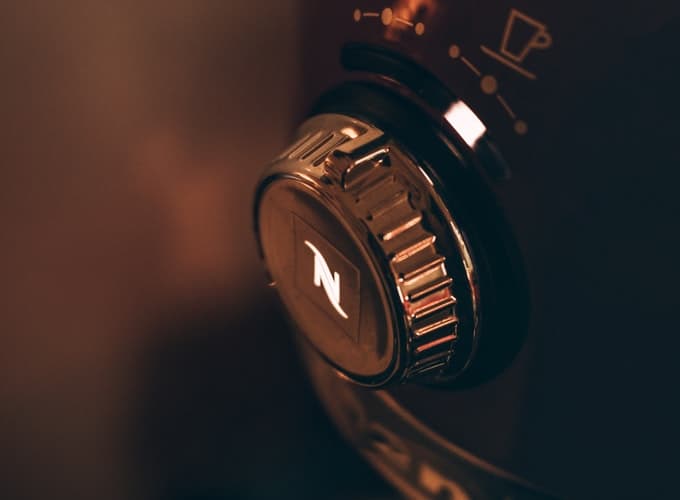 In the Vertuoline machines, the best-selling line in the United States is unique in that it can make both espresso and coffee, depending on what pods you select. The Vertuoline machines use a special centrifugation technology for unique brewing. The machine scans each pod for a barcode and automatically sets parameters for extraction and brewing. During browsing, the centrifugation technology makes the capsule spin at a very fast rate, and water is injected into the capsule in order to “infuse it”. Espresso takes about 35 to 52 seconds to brew.

During the extraction process, at the very end, a rich foamy layer of crema is also formed. It is silky, light, but full of flavor. Caramel in color, it also provides a striking contrast to the espresso.

Is more multiple-step and hands-on. If you purchase an espresso machine, in order to get the highest quality espresso possible you will have to play a big role in the actual brewing process. First, coffee beans must be very finely ground; coarsely ground beans will not work well for espresso. Once beans are the “consistency of powdered sugar”, they are added to a filter packed with a tamping tool. About 1 oz of water is used for every shot desired

Crema is not automatically produced; you have to apply certain techniques in order to obtain this result if desired. Also note that, unlike Nespresso Vertuoline, espresso machines are solely made to produce espresso.

What is crema, and why should I care? 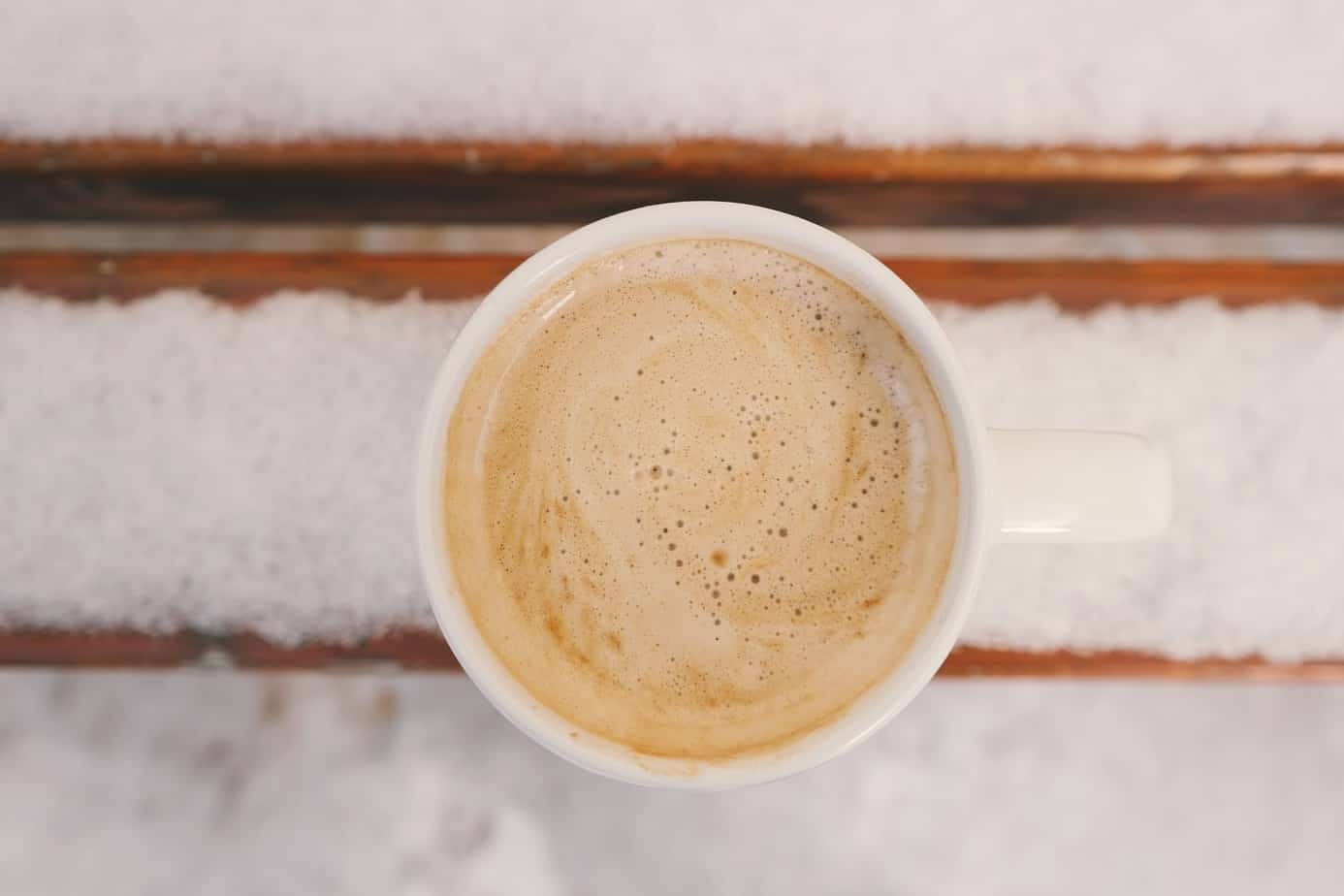 Even if you’re accustomed to drinking espresso, you may not have experienced crema, or even know what it is. Crema refers to the foamy layer that can be produced when combining different processes to make espresso. Crema can vary in color and even texture, but it is general wheat to caramel color; it can even be described as reddish-brown, depending on the coffee beans originally used.

Crema is formed when by air bubbles combining with the natural oils of finely ground coffee. It has even been nicknamed the “Guinness effect” for acting it a similar way the stout does when it’s poured.

But how, or even if crema is formed depends on a variety of factors, and some that may prohibit it even forming, including: 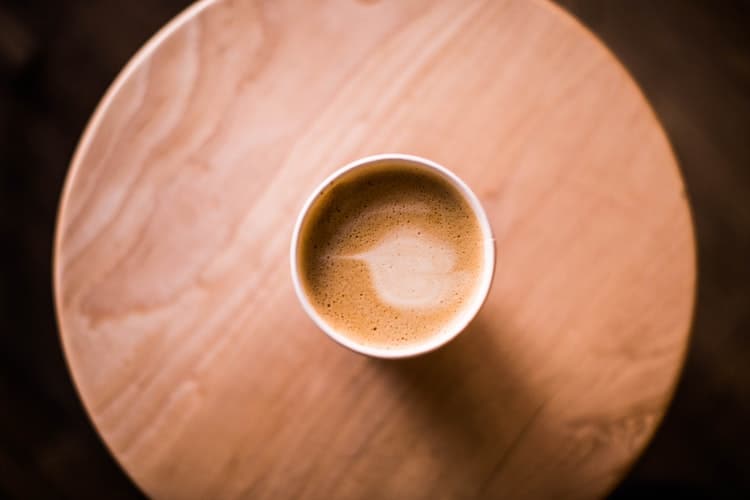 Why should I care?

Crema for many who make espresso is an ideal accompaniment. While even the best crema will not make up for low-quality coffee, crema does have the potential to add a lot in terms of flavor and presentation. Crema adds extra texture, more aroma, and is the perfect creamy compliment to espresso without diluting the flavor, as adds on, such as milk might.

At its best, crema makes espresso takes more indulgent, richer and enhances the coffee bean flavor without adding bitterness. Of course, there are some people that prefer espresso without crema because they do not care for the extra layer of foam.

What is the difference in the variety of Nespresso vs espresso? 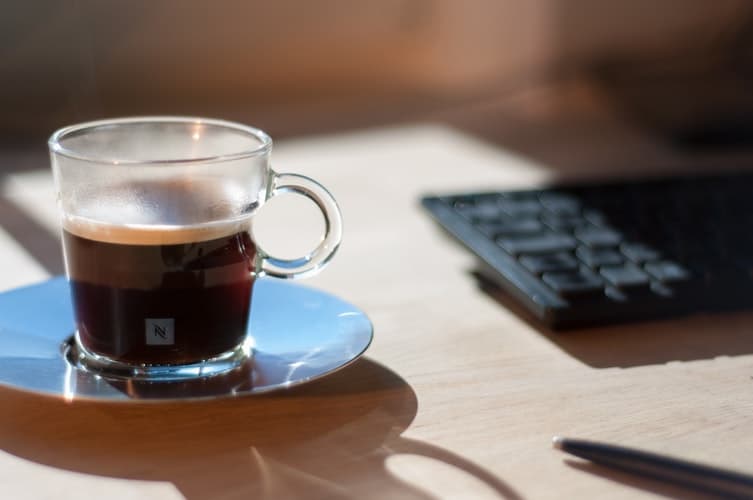 We’ve already established that Nespresso contains lines of coffee that can produce either coffee or espresso drinks. But in terms of espresso, Nespresso pods are mostly categorized based upon the level of intensity. The level of intensity is from 1 to 11, with 11 being the most intense. The current varieties for the Vertuoline machines include:

Of course, technically, with normal espresso, the sky’s the limit. As we mentioned earlier. Nespresso machines, due to their technology that operates by scanning barcodes, only work using Nespresso pods. Regular espresso machines you can use any coffee, so long as it is already very finely ground, or you finely ground it yourself.

But that doesn’t mean you’ll get optimal results. We mentioned before that a few select coffees are generally used for espresso, and that natural oils, as well as roasts, play a key role not only in informing crema but for good espresso in general. As such, while you may have far more options, you have far more room for error, in terms of both the brewing process and just selecting decent coffee for brewing in the first place. And if the coffee is not finely ground, your espresso may turn out poorly.

In terms of price, of course, using an espresso machine also gives you a lot more flexibility. If you buy more in bulk, it’ll be cheaper than purchasing individual pods.

If I want good espresso, should I purchase an espresso machine or a Nespresso? 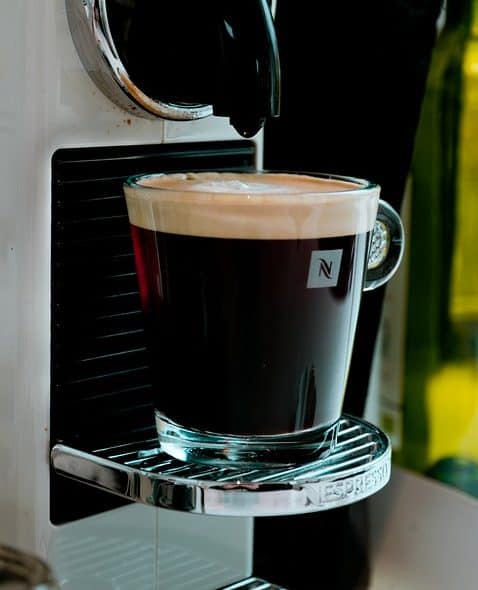 Nespresso really is a matter of taste. If you don’t like crema, you can easily make sure you get very little of it with a regular machine (and might do so even if you want it), but it’ll be rich and very present every time you opt for Nespresso. Nespresso essentially takes the guesswork out of things by providing carefully packaged, high-quality coffee in perfect proportions and automating brewing for optimal results.

Price-wise, a Vertuoline machine costs around two hundred dollars. Espresso machines as you might imagine vary greatly in price, with low-end ones as low as fifty dollars and higher-end ones in the thousands. You’ll pay less in general for the actual coffee, and it’s far easier to find coffee to use for espresso machines (unless you’re near a Nespresso location, you’ll likely have to order online).

If you want espresso with a guarantee of rich crema, Nespresso may certainly be a good option. If you don’t care about crema so much and don’t want to be tied down to a handful of choices, you should consider an espresso machine.

Bonus: espresso-based drinks to get you started: 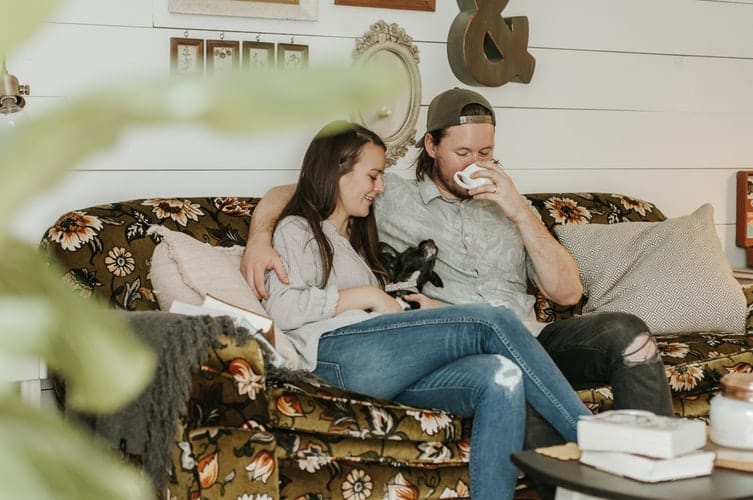 Love the taste of espresso but don’t want it always quite so strong? One option, whether you opt for an espresso machine or Nespresso, is to make espresso and customize it into signature drinks, as if you were your own coffeehouse. Some recipes are far more simple to make than you might imagine.

Nespresso Review: Everything You Need to Know