Ready to branch out from your regular morning coffee and try something fresh and exciting amazing coffee? Kicking Horse may have you covered, thanks to such a wide variety of beans to choose from.

It’s a good coffee brand that offers organic certified coffee which comes in different flavors (from light medium roast to dark roast, so today I am going to discuss them and let you know my favorite that you can find on Amazon.com or on the official site of Kicking horse.

It’s worth noting that I contacted the company to see if samples were available. They weren’t, but they were willing to help me choose the right coffee for me and find the best place to order from, based on my preferences and zip code. I imagine if anyone is really stumped once they read the descriptions, a quick email exchange initiated through their contact page could help them decide which one to buy.

I thanked them for their offer to help and but chose to order a bag of the medium roast, whole bean Smart Ass through Amazon.com on my own since I have Prime and it was available for fast shipping that way. I got my package in one day, which is even faster than standard Prime shipping. With tax, the 10 oz. bag ended up costing $11.45. If I had wanted to commit to a subscription, it would’ve been slightly less than that per bag. 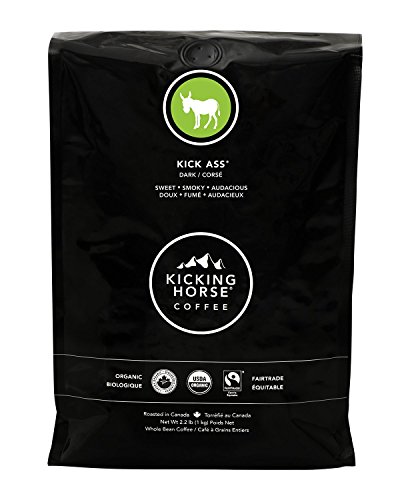 This one seemed like a hit right away, from the appearance to the smell that hit my nose as soon as the bag was opened. The beans were shiny but not especially oily. The freshness of the beans could be immediately noticed and I couldn’t wait to grind them and make a pour over.

Speaking of the bag, I do wish this came in something other than a standard bag. It’s glossy and eye-catching, but not air-tight once it’s been opened. A canister might be better, but that’s just a minor criticism. If you go through a bag of coffee per week, you may never notice the difference.

I did notice that some blends are available in larger sizes than the Smart Ass blend I purchased. Those are available in canisters. There’s a 30-ounce 454 Horse Power, for example, as well as a 12.3-oz Anniversary canister. So there’s some flexibility if you do really want your coffee to come in a can as opposed to a bag, but you may have to order a different blend or size than you hoped to.

I used an electric blade grinder to create a medium-coarse grind (what I usually use) and set up the Chemex. I probably used more grounds than the average person but didn’t measure. I tend to estimate when I make a pour over.

Filtered water right off the boil was then poured over the grounds and the bloom was beautiful and big, suggesting fresher beans. There was no roast date, but the “best buy” date was September 2018 (it is February 2018 at the time of this writing), so it was nice to see confirmation that the beans were, most likely, not that old. 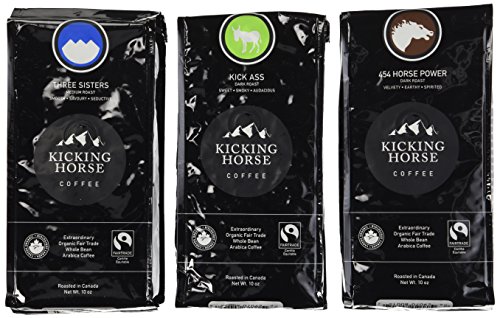 This time, the beans were ground finer, as the Kicking Horse website recommends, using the same electric blade grinder. Using the measurements on the bag and the directions on the website for a pour over, I made a delicious coffee exactly as they intended it to be made, just for comparison’s sake.

Even with the different grind size and amount—and the fact that it was a couple of days later–there was still a nice bloom. The aroma was still fresh and the flavor was still only slightly less than fresh. Again that is to be expected from a coffee that has been roasted far away, packaged, and shipped, so I’m not really holding it against it.

The coffee was strong—stronger than it was in the first cup–and with a smooth finish. It still seemed darker than I would’ve preferred for a medium roast, but I was still able to happily drink it black. If I purchase Kicking Horse Coffee again, I’ll probably try the light roast. That’s just personal preference.

I still didn’t pick up on the notes the website describes much with this cup. They were even less detectable, perhaps because of the few days between cups (even though the coffee was freshly ground before each pour over).

The Aroma and Body

The beans smelled absolutely amazing and I couldn’t wait to make a cup. There was only the tiniest hint of staleness, which is to be expected when you aren’t going to a local roaster and buying them directly. This is minimal and completely impressive.

This great coffee is roasted in Canada and I live in Georgia, so quite a bit of time passed before they got to me. The amount of time spent packaging and shipping beans will usually cause at least a little dulling of the flavor notes.

Did the coffee smell like sweet syrup, vanilla bean, and stone fruit, in bean form or brewed form? Not so much that I would’ve picked up on those notes on my own. However, there is a sweet, syrupy edge that I normally associate with dark roast coffee beans.

I think this roast is on the darker side of medium, but doesn’t have the heavy, syrupy mouthfeel or even smell that darker roasts tend to have. I’d still say it has a medium body.

Beyond My Cup: All the Coffee

There are several options for Kicking Horse Coffee, so choosing one could prove to be a challenge. I ended up going with a medium roast because that’s what I usually buy, but quite a few of the dark roasts were calling my name.

The Kicking Horse website gives detailed descriptions of each coffee’s aroma, tasting notes, origin, and recommended brewing methods. There’s also a quick general description of each one to help you home in on the ones that will most appeal to your personal preferences.

Take a look at how the different coffee beans taste, smell, and perform best, according to the Kicking Horse site. See which one stands out most to you:

Unfortunately, there’s not quite the selection of ground coffees that there is in the whole bean, but if you really do not want to buy or worry about storing a coffee grinder, there’s enough variety to suit any palette. If you need half-caff or decaf, you’re out of luck, though. If you already had your heart set on one blend and it’s not available in ground form, this could be a negative.

I haven’t tried all of the brands of coffee on the market that are sold in the grocery store, but I’ve probably tried most of them at one point or another. I would choose Kicking Horse over anything on the shelf at this point. There may be one out there that could beat this one that I just haven’t had the pleasure of trying yet, but I’m impressed by this one.

Sadly, Kicking Horse isn’t sold anywhere near me. Hopefully, that will change soon. In the meantime, I hope to order several of the blends in the future. So many of them sound intriguing, I think there’s something (probably several somethings) there for any coffee lover.

I love that they’re fair trade, organic, and sustainable and that the company supports The Nature Conservancy of Canada, The Banff Mountain Film & Book Festival, Idle Free BC, Jumbo Wild, and more. It’s clear that this is a company with heart and a concern for the planet.

Yes, they are. Kicking Horse is a company that is delivering organic coffee in many different flavors and as they say, they do not settle for less than the best.

Where is Kicking Horse coffee coming from?

The Kicking Horse coffee is coming from Rocky Mountains in Canada and is carefully grown and picked by coffee farmers since 1991.

Which Kicking Horse Coffee is best for espresso?

Cliff Hanger is a special blend made for espresso, and while you might have tried some bitter blends before, with Kicking Horse’s espresso blend you will feel its smoothness and cocoa finish.

Previous Post: « 5 Best Vietnamese Coffee Brands and How to Find Them
Next Post: The Rocket Espresso Review That You’ll Love »