Single serve coffee pods used to be an indulgence of sorts. A premium experience that took hardcore coffee lovers awhile to adapt, users just couldn’t quite wrap their heads around why they’d trade their full-pot brewers that had been working just fine all these years, thank you very much, for something that would only churn out one cup.

Over time, however, the benefits behind single cup brewing has more than justified its existence, and the compatible machines would slowly begin to creep into homes across the world, with many of those brewers carrying the name of Keurig. In fact, the brand that has become so synonymous with single-cup brewing that most people don’t know that other brands even exist.

But there are other brewers readily available, and one that you may even find sharing shelf space at your local big box store with Keurig is from a name that’s relatively familiar even if you’ve never had a cup of their coffee.

Switzerland is Known for More Than Chocolate

Known as Nespresso, it’s the name of both the coffee producing arm of world-famous confectioner Nestlé and their line of single-serve brewers. Believing to have gotten its start as the ill-received invention of an employee in the late 70’s, it would take the changing of conceptions about how coffee should be delivered before the product would start to see any real success.

In the early 90’s, Nestlé began to sell their brewers across Switzerland, eventually branching out into other territories by the 2000’s, with many of the original models being produced under the banner of other well-known appliance manufacturers. Today, the majority of brewers and the accompanying line of accessories and coffee capsules carry the Nespresso mark.

Before digging deeper into a review on the Nespresso brand, it’s probably best to address the elephant in the room, which is:

Before you head off to scour the ‘net and swim through article after article about why one is better than the other, we wanted to provide you with the basic details about each so you can make an informed decision on your own.

Nespresso was built for a very specific audience, one that is willing to accept a premium price for indulging in their own brand of coffee enjoyment. Also, the Brewers were originally created to produce espresso shots and drinks (although there is a line of brewers now that make regular coffee), and for that reason, the selection of products available is not as broad as with Keurig.

But for those who are looking for a true-blue espresso brewer at home, Nespresso answers the call and does so phenomenally.

Ultimately, the choice is up to you, as there’s really no right or wrong answer. Both companies cater to different groups of consumers, so by spending a little time figuring out what your own needs may be, you can choose whichever makes the most sense for you.

As already discussed, Nespresso was originally an espresso-focused operation, and they achieve it masterfully with offerings under the Original Line. But in realizing that there was a large population of coffee drinkers that demanded more than just an espresso only option, the company ultimately made the decision to manufacturer models that could offer a full-on filtered coffee experience.

Brought to market in February of 2014, the VertuoLine is a selection of brewers that can produce regular coffee drinks, Americanos, and a selection of espresso shots. Capsules in this category can’t be used with the Original Line (or vice versa). 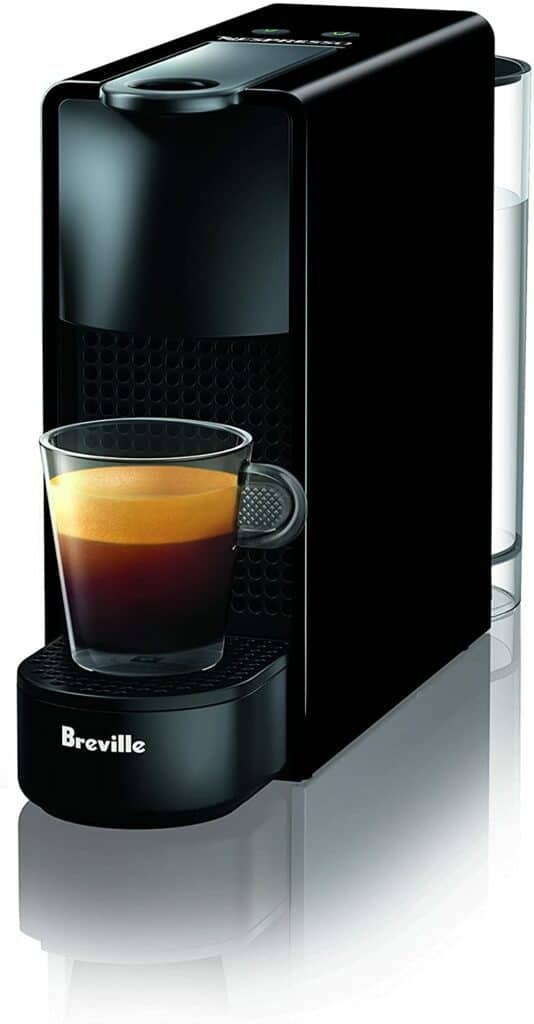 A great, small-scale model designed for smaller living quarters, the Essenza Mini comes in at just 5 lbs, supports up to two different shot sizes, and is available in different styles and colors. While it may not offer as many features of some of the other brewers, it does still provide a cost-effective way to experience a taste of what the Nespresso brand is all about. 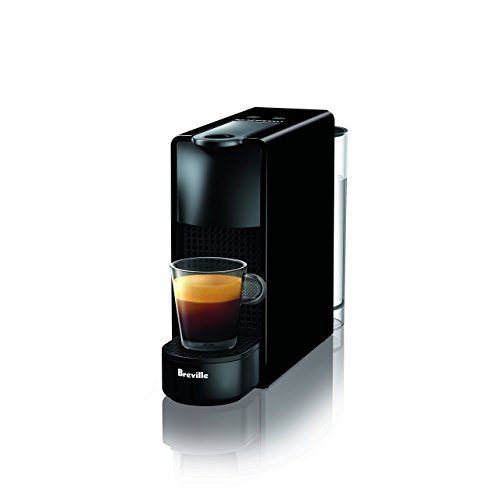 Breville - Nespresso Essenza Mini Espresso Machine
$179.00
Check Price
We earn a commission if you click this link and make a purchase at no additional cost to you. 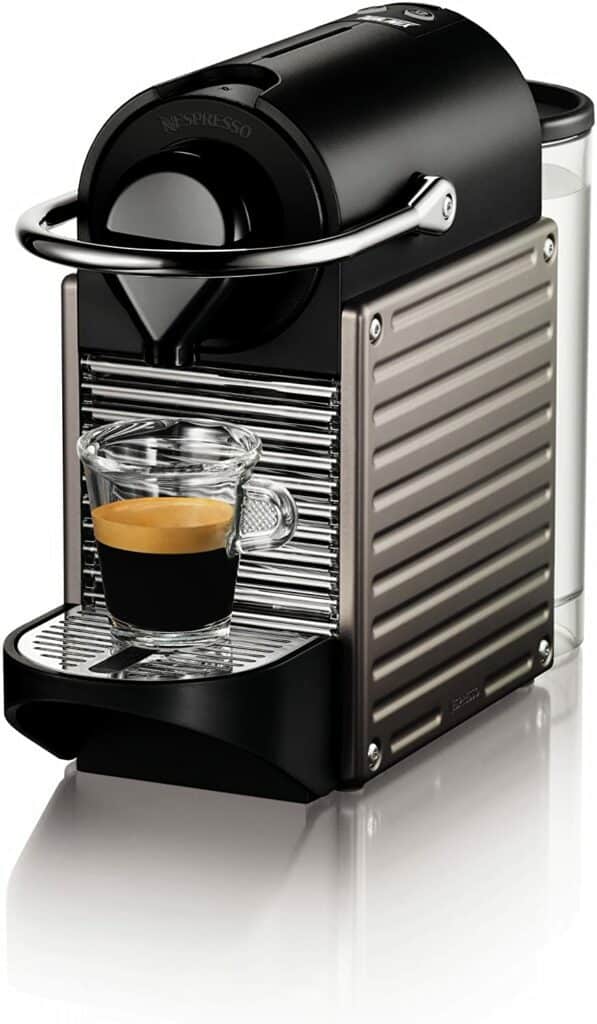 Lightweight and compact much like the Essenza Mini, the Pixie supports an additional cup size (three in total), and heats water in an impressive 25 seconds! 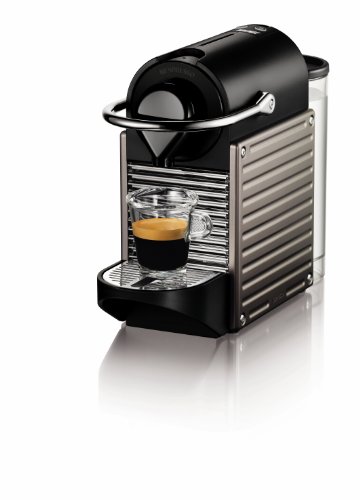 Nespresso Pixie Espresso Maker
$184.99
Check Price
We earn a commission if you click this link and make a purchase at no additional cost to you.

If you like to tinker with the variables surrounding your favorite cup, then consider investing in the Expert. Capable of brewing up to four different sizes, this unit also supports three different temperature settings. Bluetooth connectivity allows you to customize any drink to your liking, while also keeping you abreast on things such as when it’s time for a descaling or if your current stock of capsules is running low.

If you’ve never used a Wi-Fi-connected brewer before, you’ll be pleasantly surprised at just how convenient it is to receive notifications relating to the integrity of your machine. 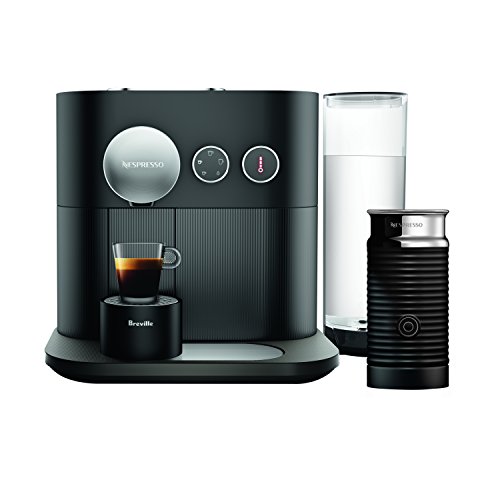 Breville-Nespresso
$399.99 ($399.99 / count)
Check Price
We earn a commission if you click this link and make a purchase at no additional cost to you. 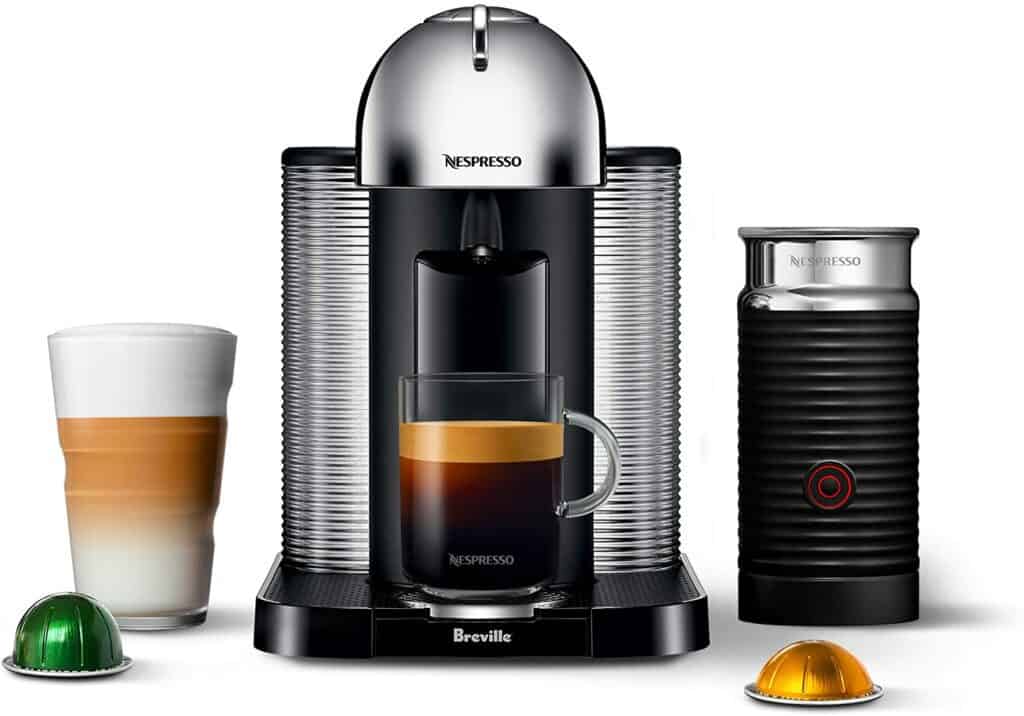 Being a relatively young subset of the Nespresso brand, the VertuoLine’s choice of brewers is considerably slimmer than that of the Original Line. Remember, these units are designed to brew a wider variety of amazing coffees than products found in the Original Line, and capsules used for these machines are not interchangeable. 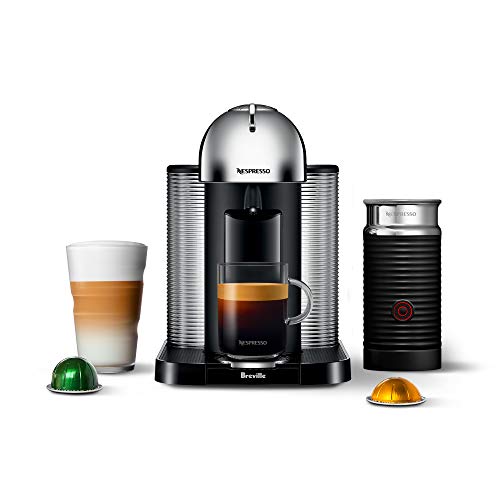 Breville Vertuo Coffee and Espresso Machine
$243.68
Check Price
We earn a commission if you click this link and make a purchase at no additional cost to you. 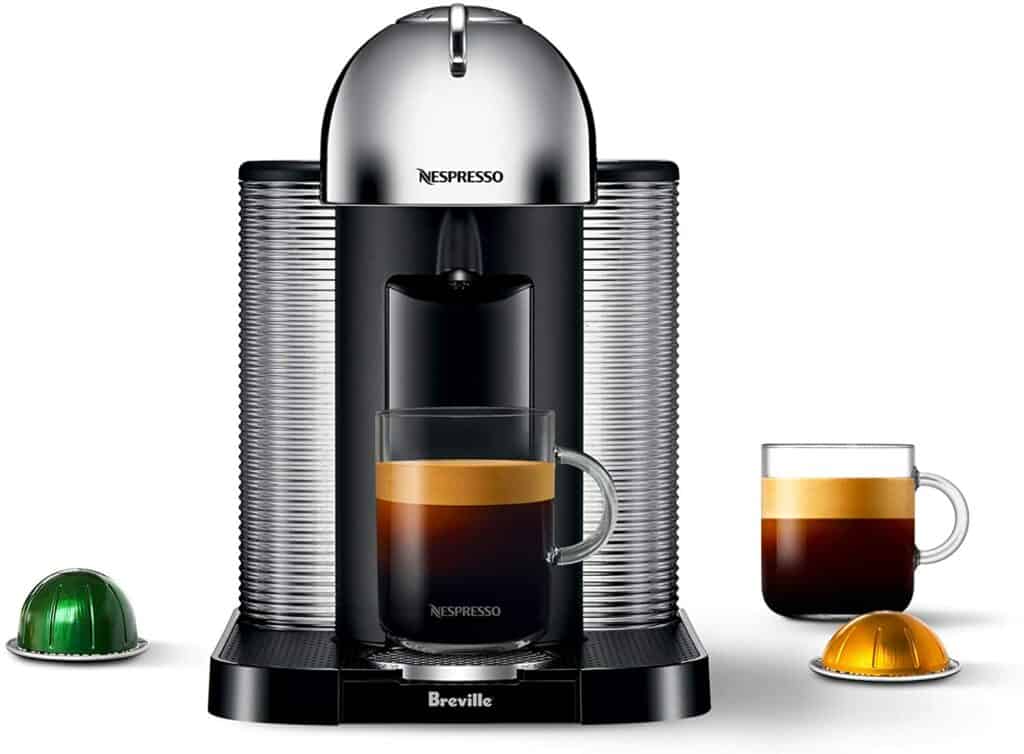 Capable of producing both single and double-shot espressos as well as three separate sizes of regular coffees, this is the flagship brewer in the VertuoLine. Certainly not a bad brewer for the price, which is right on par with a Keurig machine, but it doesn’t come with a lot of the extra features that we’ve come to expect on even less expensive single-serve models. 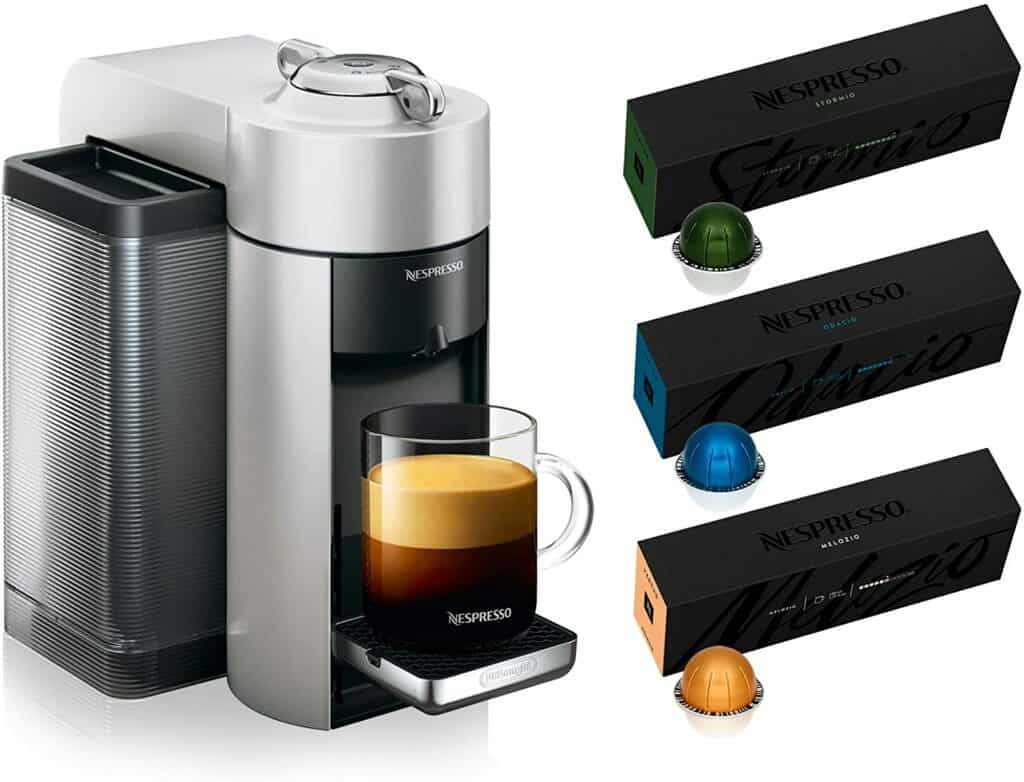 This brewer shares a lot of the same specs as the Vertuo but incorporates a different exterior design aesthetic. It tends to come in the same price point as the Vertuo, so it’s really a matter of which body type you prefer in the case of considering a purchase between the two. 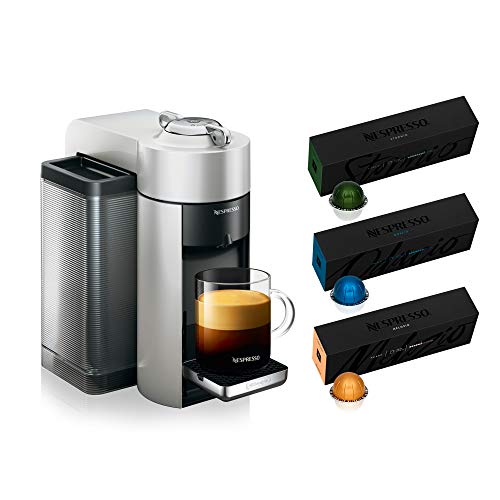 Nespresso ENV135S Vertuo Evoluo
$232.00
Check Price
We earn a commission if you click this link and make a purchase at no additional cost to you.

The VertuoPlus is the latest of Nespresso’s dual coffee and espresso brewers. Available in an assortment of different colors and with a design all its own, it’s also capable of producing drinks in the same five sizes as the other brewers in this line.

While the VertuoLine is meant to be Nespresso’s answer to other more widely recognized brewers, the machines themselves aren’t without their own unique charms. One such concept is that of Centrifusion™, a process in which the brewer spins the coffee capsule at ultra-fast speeds while forcing hot water through the grounds. This allows for a smooth, balanced cup every time.

Nespresso ENV135S Vertuo Evoluo
$232.00
Check Price
We earn a commission if you click this link and make a purchase at no additional cost to you.

Not to be mistaken with K-Cups or other hot beverage pods, Nespresso created, and is the exclusive manufacturer of, these one-of-a-kind coffee capsules. “Grand Crus,” as they’re called, are available in a number of different flavors and strengths that represent many of the most preferred drinks on the market, including seasonal and the occasional limited-time offering.

In a further showing of the spirit of elegance, the Nespresso line embodies, capsules weight at a price point that exceeds other coffee pods. Starting at around $.70 a piece for Original Line capsules and ranging as high as $1.10 for VertuoLine drinks, each is constructed of aluminum and is hermetically sealed in order to prevent any deterioration of the grounds inside. And it bears repeating; capsules cannot be interchanged between the VertuoLine and Original Line.

Seeing as how Nespresso was originally created as a line of espresso-only brewers, you’d do best to focus on choosing from the Original Line. If your budget allows, the extra bells and whistles found on the Expert (you’re gonna love the Bluetooth option!) really set this model apart from others, but even the compact Essenza Mini is a great choice, especially if space is a concern.

While products found in the VertuoLine aren’t necessarily bad choices, the reality is that the company may have spread themselves a bit thin by trying to bring to market a machine that produces full-size coffees as well as espressos.

It does accomplish what it sets out to do, but with a brewer that carries a higher price tag than comparable Keurig machines, and without many of the same features that have become commonplace in single-serve brewers. Plus, the scant selection of beverages available for VertuoLine brewers offers nowhere near the variety you’ll find with Keurig.

Nespresso is a premium brand that offers exceptional products at prices that are substantially higher than their competitors. From the brewers themselves to the capsules to even the accessories and drinkware, if you’re considering adding anything from the Nespresso catalog into your collection, you should expect to pay more for it.