It’s gotten easier to pull a perfect shot of espresso at home if you’ve got the right equipment, but the other half of the latte and cappuccino equation—the foamed or steamed milk—can be much more difficult to achieve outside of the café.

While manual milk frothing wands are cheap and easy to come by, the results are often less than satisfying if you’re used to the sweet, creamy milk served by your favorite barista with a cafe-grade milk warmer and frother.

For buyers looking to replicate the café experience at home, there are now several options for frothing and steaming milk at home. Electric frothers take a lot of the guesswork out of preparing lattes or cappuccinos, frothing milk with the touch of a button.

Still, many of the best milk steamer and frothers have limitations that keep them from competing with the drinks you’d find at a coffee shop: for example, many models don’t actually heat the milk and instead froth milk that’s been heated separately. For me, this is a significant drawback: if I have to heat milk and then transfer it to another machine, this means twice the cleaning and additional work to make every drink. That’s why it is best to check Twelvmag for detailed reviews of the best steamers and frothers.

For this reason, my three favorite home milk steamers are all models that can heat milk to the temperature you’d expect for a latte or cappuccino, which is around 145° F. So, if you’re wondering “Does a milk frother heat milk” – These ones do! Of course, this also means that the price point jumps up significantly, but it’s ultimately a question of trading a higher initial investment for better performance.

NOTE: You can also use these frothers for soy milk, almond milk, and coconut milk for an interesting substitute although the consistency isn’t always the same as milk. Discover the best milk for frothing to use here. 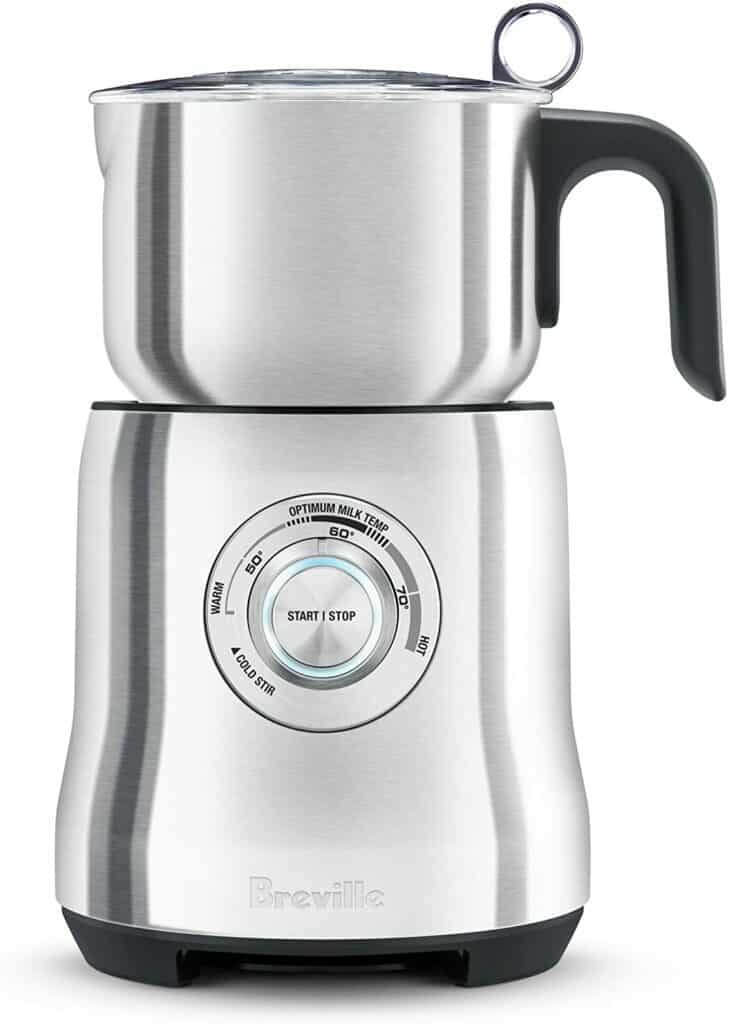 Although it’s the most expensive of these three milk frothers by far, the Breville Milk Café’s performance definitely justifies its price point. In addition to being much larger than its competitors, the Breville Milk Café also provides users with the ability to add ingredients directly to the frothing vessel, so you can make a rich and creamy hot chocolate or chai by adding syrups directly into the milk.

Pros of the Milk Cafe:

Cons of the Milk Cafe:

In my opinion, the benefits of the Milk Café milk steamer far outweigh the negatives. If you’re not on a budget, spending the extra money for the Breville will definitely pay off, and you may find yourself spending less at your local coffee shop because you can achieve the same drinks at home. 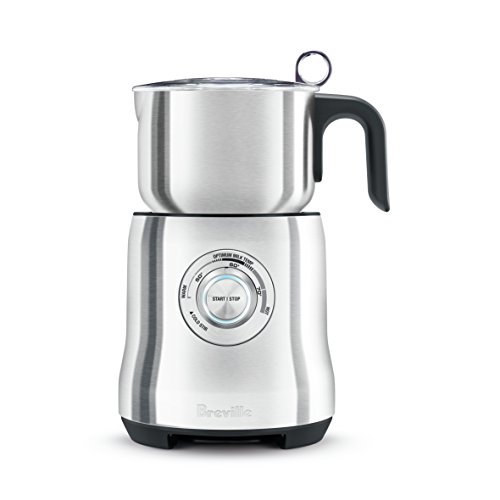 One of the best milk frothers you can buy, the Breville Milk Cafe BMF600XL gives you a large frothing capacity, dedicated cappuccino and latte discs, and the most control over frothing temperature.

Buy at Amazon.com Buy directly at Breville
We earn a commission if you click this link and make a purchase at no additional cost to you. 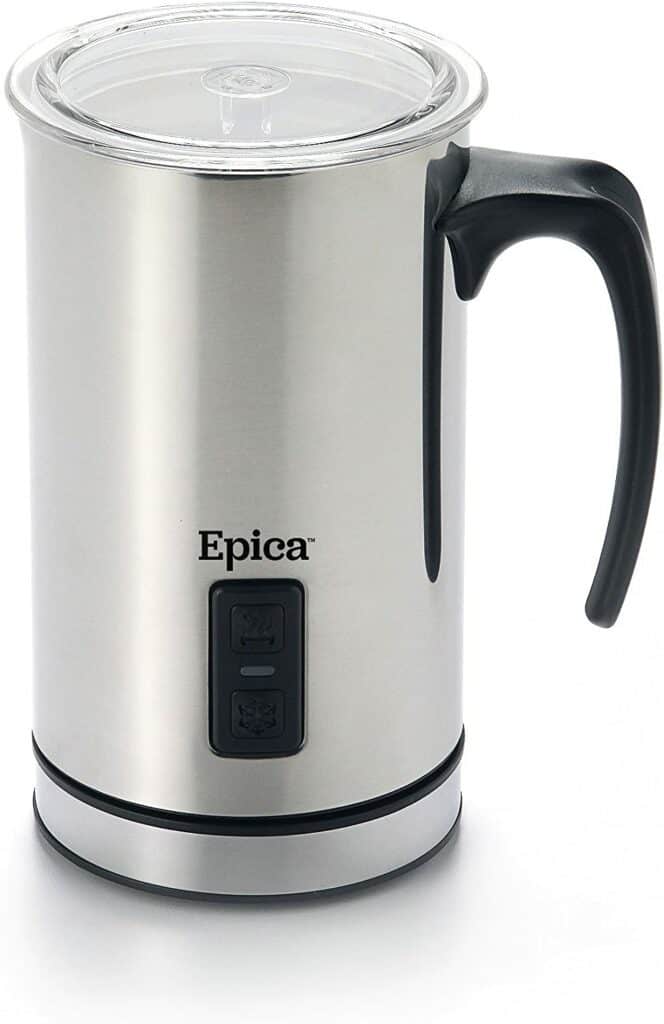 For buyers looking for an affordable and dependable automatic milk steamer, the Epica is a really handy model, especially if you’re only looking to prepare one drink at a time. It’s compact, so storage is less of an issue, and it has several features that make it a great choice for home baristas.

The Epica milk frother is a great model if you’re just starting out with home steaming, but it does have some drawbacks. Still, it is easy to operate and doesn’t take a lot of space, so if you’re only making one drink at a time it’s a great home milk steamer. 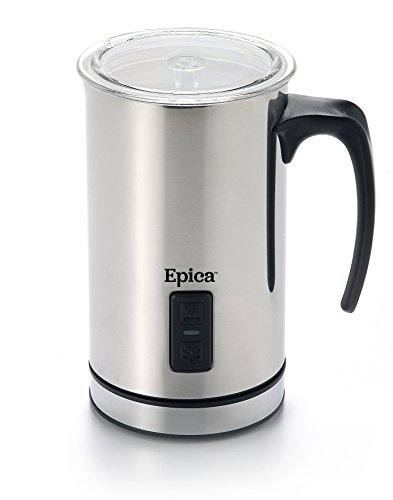 Makes hot or cold milk froth for cappuccino or iced drinks, heats milk for latte and other hot drinks. 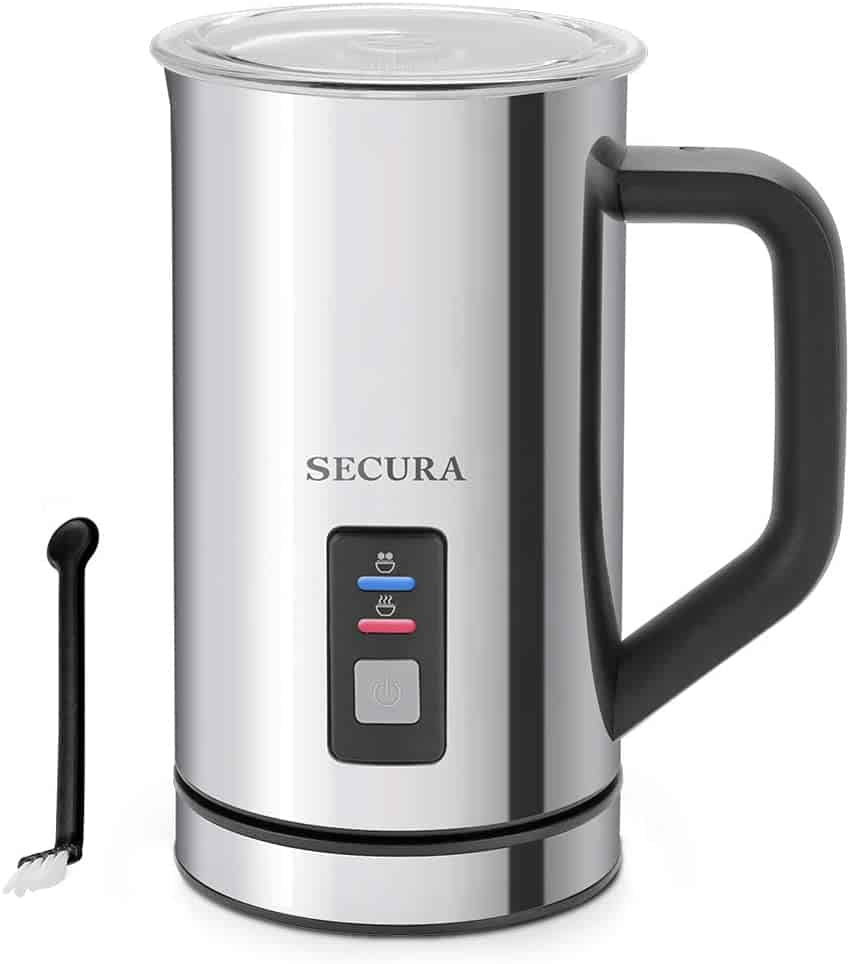 For a balance between price and capacity, a Secura is a great option, earning it a spot on our list of best milk steamer and frothers. While none of the available models steam as much milk as Breville’s Milk Café, the largest Secura definitely comes close to rivaling the pricier model’s capacity.

I like the Secura as an affordable but versatile home milk steamer and frother, but I would want something a little more dependable for everyday use. Daily wear on the components can definitely exacerbate the leaking issues. 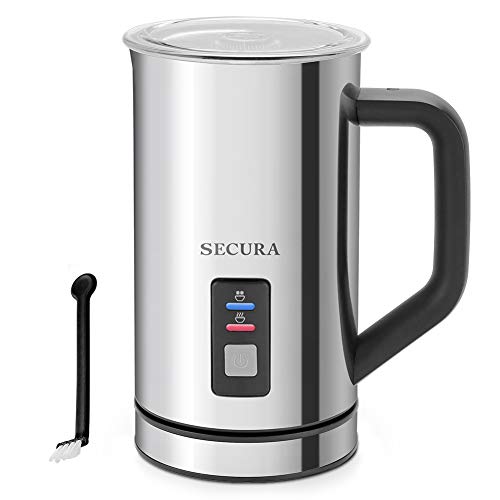 Wrapping Up on Milk Steamers

I like all of these steamers, and any one of them would make a great addition to a home barista’s kitchen. Ultimately, the decision comes down to questions of price and capacity: if you’re only steaming a drink at a time, there’s not much of a need to go all out and buy a 3-cup steamer, but if you’ve got a whole family of latte drinkers, you’re going to want the extra capacity of a larger maker.

One of the best milk frothers you can buy, the Breville Milk Cafe BMF600XL gives you a large frothing capacity, dedicated cappuccino and latte discs, and the most control over frothing temperature.

Buy at Amazon.com Buy directly at Breville
We earn a commission if you click this link and make a purchase at no additional cost to you.
Click here to cancel reply.